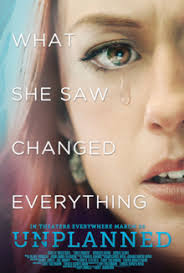 My wife and I have never been big fans of deep or controversial movies. The reason being that if we want to go to a movie, we want to go for the experience of escaping into an adventure or travelling to a distant alien planet or rooting for the underdog who travels into hostile territory to destroy a ring that nobody else has the courage or will to do. Recently, we took a different turn and decided to view the movie Unplanned.

The directors are Chuck Konzelman and Cary Solomon, who both served as writer and producer for the God’s Not Dead movies, specifically the first and second. This fact alone caused some initial hesitation walking into the theater because while several Christian movies in the past, most notably these and several Alex Kendrick movies, have good intentions, they paint a very irresponsible and some would say dangerous view of how to live a Christian life. The basic messages that all of these films convey is that if you pray the perfect way and argue incessantly with the opposition, then your prayers will always be answered according to your own will and a victory celebration will ensue in the end, complete with a Christian rock band playing. The movie War Room even goes as far as to dangerously show that you can scold satan in a drawn-out monologue in order to drive him out of your house and to save your marriage, practically daring him to retaliate. All of this effectively turns God into a genie that will grant every prayer request so long as we are pridefully adamant that our will is so important to us that God just has to intervene.

This film however, takes a different approach. I will say very bluntly and sincerely that this is an excellent film. The story is about a woman named Abby Johnson, who is drawn into a career with Planned Parenthood because she is told that they focus on women’s health, care about women’s rights, and the always erroneous logic that by allowing easier access to abortions, the overall number of abortions decreases. Without providing any spoilers, there are a handful of scenes that are very disturbing to watch. Yet, unlike what some term as “splatter films” that focus on grotesquery for the sheer sake of making the audience uncomfortable, this films explores these disturbing scenes within the context of the narrative that is being explored. The story continues to follow the account of this woman who begins to question her own mission in life until she reaches a critical point where she can no longer look the other way. The story is a very realistic portrayal of the long term physical, psychological, and spiritual impact that abortion has on women as well as the struggle with redemption and forgiveness that comes after. This is the part that many secular films leave out, sparing audiences everything of the reality of this situation and simply showing the woman reluctantly going in to the clinic, and then cutting away to a future moment in time where it’s all conveniently buried and moved on from.

Nobody could expect anything less from mainstream critics to immediately jump on the negativity bandwagon in much the same way that they practically nominate LGBTQ centered movies for prestigious awards before production even wraps principal photography. Variety states of Unplanned, “The memoir of a Planned Parenthood worker turned anti-abortion activist isn’t good drama but it’s effective propaganda (if you’re part of the choir).” The Guardian states, “We get corny closeups of medical tubes overflowing with what look like raspberry Icees. It’s enough to make anyone turn to a higher power, just to get this movie to end!” and “There’s nothing in here about the hardship restricting women from their own constitutionally protected reproductive health has on the community.” The Hollywood Reporter makes the absurd claim that because nobody will change their views on abortion anyway, then the film company must’ve just been out only to make a profit, “So that leaves the financial motive, which puts the film company in the uncomfortable position of indirectly making money from abortions. And unlike Planned Parenthood, it’s not even a nonprofit.” Movie Nation states, “The Texas-sized cow-patty of contradiction and hypocrisy doesn’t end with “I had two abortions, you can’t have any.”

Yet, amidst all of these smug and self-satisfied critiques of the acting, fake blood, mocking of a higher power, financial motives, and film dialogue, not one of these critics dares to challenge the accuracy of the atrocities taking place in the film. It’s quite easy to criticize a film that does not have the financial means to cast A-list actors as well as pay for realistic blood provided by Industrial Light & Magic. It’s quite another to challenge the accuracy of the suffering that Planned Parenthood has caused women as well as the untold deaths of the unborn.

In a world where hundreds, if not thousands, of films are produced each year that promote a leftist agenda, the term “propaganda” more fittingly applies to a largely secular and indoctrinated media. Not to the handful of voices, such as Abby Johnson portrayed in this film, that chose to speak out against an overwhelming secular current. If one were to walk out of the theater thinking “what hypocrisy, she had two abortions and now she’s saying we can’t have any” then either that person is in denial or missed the message of the film altogether. The message is not that Abby Johnson “got to” and now she “won’t allow others to.” The message is that she “got to” and now speaks about the pain and emotional anguish that this causes women and the deaths of countless children.

Several on the left claim that the pro-life movement is based entirely on facts that are inaccurate. Where do they get their sources of information from? Planned Parenthood. These same critics claim to be champions of fact, picking apart a Christian film that boldly takes a stand, but do so based on information directly from the organization that they are blindly defending. It’s striking how critics of this movie and the entire pro-life movement cry factual inaccuracy, and yet they believe so blindly and with no research the ludicrous claim that Planned Parenthood’s primary business entails mammograms and pre-natal care and only 3% of the business entails abortions. The Variety review mentioned one thing that is correct; the film has touched millions of pro-life hearts (the “choir” as they put it) across the country. But those with a pro-choice mindset need to view it with an open mind and understand the atrocity that is Planned Parenthood and not simply set their mind on “raspberry icee” blood.

The bottom line: If you want to be entertained, then watch celebrities congratulate themselves in the Oscars over pro-choice “art” such as The Handmaid’s Tale. If you want blunt and inconvenient truth, then please view and support Unplanned. 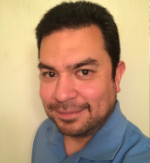 Patrick is married to his wife Allison and together they have one boy named Luke. He has a Masters degree in Finance as well as a second Masters in Information Technology, both from Colorado Technical University. He has worked for Agape Catholic Ministries since early 2017. In his spare time, Patrick enjoys hiking, fishing, and cheering on both the Denver Broncos and the Fighting Irish of Notre Dame.