The “Church” of the Bouncy Castle

Last weekend two days after the “Brexit” result of the EU referendum we went along to our local parish school summer fair to participate and show support.
It’s a highly organised event with many parents and school staff working well together to provide lots of amusement and fundraising activities. The curious thing though was that no one (so far as I could ascertain) was in deep discussion or intense debate over the referendum…

but then after all why would they be at a summer fair. I guess my point is that people at such events simply focus on the thing itself and enjoy it for the simple pleasure that it is, not least because it’s always a delight to see families having fun; parents, grandparents and most of all children.

So as my wife and I took our turn to help supervise the endless stream of kids coming and going on the inflatables, and I watched them having enormous fun tumbling and bouncing in all sorts of directions without anyone getting hurt… I thought… that’s how God wants his children (all of us) to feel within the safety and security of his Divine laws.

Children adore bouncy castles precisely because they know they can be safe within the soft but relatively firm environment of the play area. And if there’s a collision or two, it’s rarely if ever deliberately intended and all is forgiven quickly and without fuss or resentment. God’s laws, His commandments and the Church’s teachings of faith and especially morals are also meant to be a firm but gentle framework where, so long as we respect the boundaries and don’t try to do our own thing beyond the confinement of the “play area” i.e. the Christian code of living, then the more free and joy-filled we will become.

It really ought to be that simple; like the principles of kids having fun in a bouncy castle. So when I hear people moaning and groaning about the Church’s teachings on this or that issue of morality and especially sexual ethics, I just think we should try to learn more from the humble submission to supervision and authority that children naturally give especially when they want to be free to play and have fun.

Therefore, when we think about what really makes for Amoris Laetitia (the Joy of Love), the rules and laws of the Gospel interpreted for us by the Church bring a confinement that in the end doesn’t restrict but unites truth with freedom. And while I’m on the subject of bouncy castles one of Søren Kierkegaard’s sayings applies perfectly to this: “The old Christian dogmatic terminology is like an enchanted castle where the loveliest princes and princesses rest in a deep sleep; it only needs to be awakened, brought to life, in order to stand in its full glory.”

Our task then is to reawaken dogmas and always give them new life and, as I’ve said before, we can learn a lot from observing the humble simplicity of children, not because God wants our faith and loving to be childish, but as Jesus said: to be childlike. 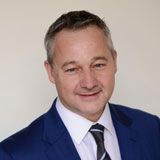 Edmund Adamus, MA. Cert. Thl. TEFL. Dip.Th, is the Professional Adviser to the Episcopal vicar for education in Portsmouth Diocese, UK. Edmund married Catherine in 2005 in Paris. They have two children: Paul, 7, and Beatrice, 3 and live in the county of Surrey. Edmund is a recognized authority on the teaching of the Catholic Church on the sacrament of marriage, marriage preparation, St John Paul II’s teaching of Theology of the Body, and marriage healing. He has spoken at conferences across Europe, North America, South America, and Australia, offering his expertise in these domains to thousands of people regarding the pastoral care of married couples. In 2006, Edmund introduced CatholicMarriagePrep.com to the U.K., the first Online Marriage Preparation Program; he is still actively promoting the program. Edmund also offers a refreshing, complete and joyful view of the Church’s wonderful teaching on marriage and sexuality-one that truly embraces, and even celebrates, God’s glorious plan.